Most of us start our ‘cooking’ and ‘baking’ lives by watching a close family member preparing our meals and desserts. My earliest memory goes back to my grandmother and her baking for the Christmas season. As I grew older, I began to learn this pattern and, as the end of October rolled around, started counting down the days when this wonderful and exciting routine would begin. It never changed and exactly to the day, six weeks before Christmas eve, one part of the kitchen was given over to baking. The supplies were lined up on a table, ranging from the required quantity of flower, butter (grandmother never – ever used margarine), sugar, candied fruits, etc. At that time, I was not very much interested in the ingredients or ‘how the cookies were made’, my goal was getting to the dough left over in the mixing bowl and licking that sticky ‘stuff’ off my fingers. What a blissful time it was to get that first taste of what was going to be an integral part of the festive season. I was very well aware that until then, there would not even be smallest taste of these delicacies since tradition did not permit that they would be served prior to that time. The wait was well worth it; the flavors of the many varied cookies and stollen (note: a rich yeast bread containing raisins, citron, and chopped nuts) were something one would not taste until the next Christmas season. It also was tradition in my family to prepare sufficient loaves of stollen to last until Easter, when the last piece was eaten. Needless to say, grandmother’s attic was off limits to anybody other than her for those months, since all these goodies were stored there, the containers marked by content and date. Also, the attic was the exact temperature during the winter months for long term storage of foods.

In later years, grandmother made a point of , almost, tying me down in the kitchen when she was preparing meals. My complaining that I had better things to do than to peel potatoes was countered by – ‘You must learn how to cook, otherwise you starve’. The terms of counting calories or watching ones cholesterol were foreign to us. I come from a cooking tradition where butter and margarine were used extensively, and oil sparingly. Olive oil was something we were not familiar with. It is during my adult life, and once I had left the kitchen of Eastern European cooking behind, that I began to appreciate the taste and varied uses of olive oil. Nowadays, there are very few instances when I make use of butter or margarine in the preparation of my meals. Being a full time working person, my tendency is to ‘quick’, yet healthy meals, while still using fresh produce, which does not mean that I have given up on preparing meals demanding more time and effort. I love entertaining and that is where those come in.

Over the years I have experimented with recipes and changed ingredients here and there. There is nothing more satisfying than sniffing the aroma drifting off the meal being prepared and then being followed by an equally satisfactory and mouthwatering taste. My friends sometimes ask me what is in ‘there’, but I really don’t know. I just close my eyes, smell and add. That’s when cooking really becomes fun. :-)

Have your say about what you just read! Leave me a comment in the box below. 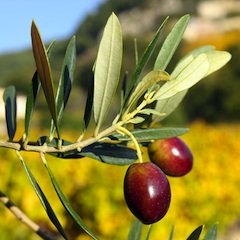 Why is olive oil so good and yet so healthy at the same time?

We're used to having to choose between the two. For example, when we're presented with food that tastes like cardboard but we're told is full of organic, unsweetened fiber. ;-)

Well, olive oil is mostly composed of mono unsaturated fatty acids. These acids can help lower the risk of heart disease by lowering cholesterol levels. They can also help normalize blood clotting and be beneficial to blood sugar control (re: diabetes). Olive oil is rich as well in antioxidants and in vitamin E, which are believed to play a role in cancer prevention.

So, enjoy olive oil in its many uses, mainly culinary ... and remember that the secret is to add olive oil to other quality ingredients (e.g. tomatoes, feta, arugula, bocconcini, etc) to end up with absolutely delicious and healthy food!